The other day I got to meet Willie Mitchell and Slava Voynov, both defensemen for the Los Angeles Kings. It was a blast. They were signing autographs at the Staples store in Burbank, about a 20 minute drive for me. (For those of you who don’t know, the Kings play in the Staples Center. The Kings aren’t just choosing an office supply store as the ideal place to sign autographs.)

It was fun to meet other fans and wallow in our geekiness. It’s almost like having a secret identity and being allowed to shed the disguise for a couple of hours. In “private”, I am a rabid LA Kings fan who owns a card containing a swatch from a Justin William’s game-worn jersey. It is encased in plastic. It is a source of both pride and embarrassment. But at a fan event like the autograph session, I am among my peers. It is refreshing and exciting.

The rules of this signing: we could have one signature per player, we could take a photograph but would have to stay in front of the table.

Bummer. My son, who accompanied me, put his longboard and hat back in the car so that I could get my jersey signed by Slava and Willie. I love that boy so much. He knew how important it was to me to have the advent calendar I’d made signed by players.

I got really nervous as the line moved forward after an hour of waiting. The Ice Crew girls liked my  calendar. Slava signed first. I said hi. He said hi. That was the extent of our conversation. Maybe I should have learned a Russian greeting for the occasion. Good idea for next time.

Willie signed the back of the calendar and then asked to see it flipped around, because he didn’t get a good look at it. I told him what it was and he really liked it. Bailey, the Kings mascot, gave it a thumbs-up. (I had him sign it too. Bailey is terrific.) By then the woman in charge was giving us the evil eye even though it was Willie who had chosen to hold up the line. (Back off, bitch! LOL)

And here’s the front of the advent calendar.

I submitted a story to Liquid Silver Books’ call for geek stories and they decided they want to publish it! WOOT again! I’m very excited and I can’t wait to talk to the editor about it.

This is a picture is of the Los Angeles Natural History Museum, where the hero of the story works as an entomoligist, which is a bug expert. This is not to be confused with an etomologist, which is a word expert.

I have become obsessed with this game. It’s so much fun. The music is fun. The graphics are beautiful. You can’t get bored because here is always something new, even after you beat the game. Crazy Dave is hilarious.

You don’t want to start playing. Really. It’s addicting. But if you feel the need to ignore my warning, go here to play for one free hour. 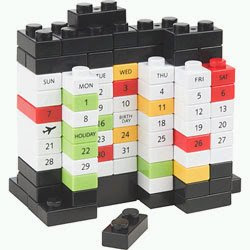 I’ve always liked Legos, so I thought this puzzle calendar was a neat item. However, the practicality of rearranging all the blocks every month…seems like one more thing to have to do. That’s why I don’t like those day planners where you have to write the days yourself. I like ’em pre-printed!

But if you have a little kid, it might be a fun way to teach him/her about the days of the week and calendars.