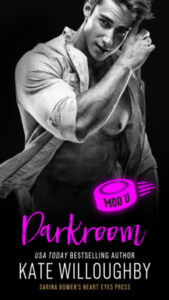 Check out Kate’s funny, feel-good series starter for one low price during the month of July! (North America only.)

While researching a detail for my work-in-progress (tentatively titled Small Print), I needed to find out if they still made Ken dolls. They do indeed. In fact, Ken has evolved since I was a little girl. As a Starbucks barista, I was amused to find there is a Barista Ken. With a man bun, no less. His jeans are distressed too. I actually think he’s kind of cool and if I were playing with Barbies now, I think he’d give GI Joe a run for his money. 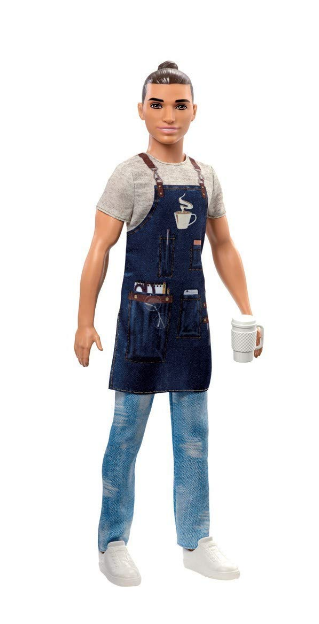 I also kind of liked this sexy, nerd Ken, even if his shirt leaves a lot to be desired.

While in the Ken area of Amazon, I saw Barbie and Ken come in a Cafe Set, but even though I adored the tiny panini press accessory, I though it was sexist that Barbie was the server and Ken was the chef.

But then they sort of redeemed themselves with this guy…

I’ve got to get back to writing, but I’ll leave you with this…the Ken that tops them all…Merman Ken! I mean, wow. Just wow. Notice the crotch joint that allows his tail to move and his jaunty shell necklace and bracelets. How could you not want this guy? LOL

To celebrate the release of Animal Attraction, I’m going to be participating in some Facebook parties in the next couple of months. Fun games and giveaways guaranteed. Plus, I’m giving away a Kindle Fire! 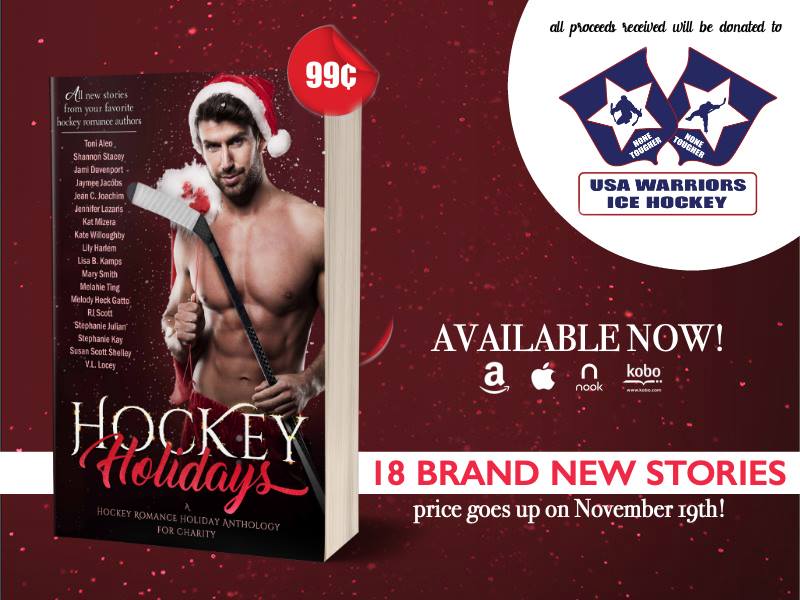 I’m so excited and proud to be involved in this Hockey Holidays anthology.

It’s a collection of 18 brand new romance stories from USA Today, New York Times, and all your favorite best selling hockey romance authors, the proceeds of which will go to the USA Warriors Ice Hockey Program.

Here’s bit about them:

The Program’s mission is to organize and administer an ice hockey program that provides a recreational, therapeutic experience and education.

The program educates, trains, motivates, and encourages the formation of “USA Warrior Hockey Programs” locally and nationally while encouraging individuals who have physical disabilities incurred during service to the United States to participate in the sport of ice hockey in an environment that is adapted to the level of their ability.

The USA Warriors Ice Hockey Program, Inc. is staffed by volunteers, on-ice and off-ice mentors and directors who do not receive any compensation, stipend or other remuneration for their time.

Please consider buying a copy of the anthology so we can make that donation a big one. The price for all 18 stories is only $.99 now, but the price goes up on November 19, so you might want to act quickly.

How We Fell in Love (Ice Cats) by Toni Aleo

He knew she was the one, she wasn’t so sure, which is why Grace and James’ love story is one for the ages.

A Second Shot by Shannon Stacey

She was the one who got away—the woman Erik Burke walked away from to focus on the game—but when their paths cross once again, all he wants for Christmas is the chance to take another shot at love.

A Wolfe Brothers Christmas (Game On in Seattle) by Jami Davenport

Bryan’s planning to propose to Georgiana on Christmas Eve, but will the chaos of their families’ first holiday together ruin their special moment?

Harry “Deke” Edmonds hides his secret, hoping for a Christmas miracle. When confronted with the truth, will his heart-breaking decision cost him both Kitty and the Huskies?

Vegas forward Tyler Quinn made the biggest mistake of his life when he broke Ella’s heart, and he’ll need more than an ace up his sleeve to win her back in time for Christmas.

On his way to the team holiday party, Gideon Aguilar mistakes Bailey Peng for his Uber driver. After inviting her to join him, they make more than merry, but at the end of the evening, the sexiest, most captivating woman he’s ever met is nowhere to be found.

Sophie Delaney never intended to walk into ‘that’ locker room, at ‘that’ moment, but she did, it happened, and now she’ll never be the same again.

Christmas Interference (The Baltimore Banners) by Lisa B. Kamps

Shane Masters no longer believes in second chances, happy-ever-afters…or love. Can the woman who knew him best thaw his heart with a little holiday magic before it’s too late?

This Christmas, Em Davis is bringing Mr. Wrong home to prove a point to her parents. He’s arrogant, conceited, and uneducated, and they’re going to hate him. But what if Ian Reid turns out to be Mr. Right?

Logan knows lusting after his captain’s brother can only lead to trouble. But when fate throws him and the temptation that is Archie together, it’s hard not to fall in love.

All I Want (San Francisco Strikers) by Stephanie Kay

When fate finally brings first loves Maggie and Alex back to the same city, will Maggie be brave enough to give the relationship she never forgot a second chance? Or will she put their love on ice?

For Buffalo Bedlam defenseman Vince Forsberg and his boyfriend Joseph Parelli, the pressure to make their first Christmas together perfect leads to a lot of chaos, holiday mishaps, and some unexpected results.

Two years ago, Mitch shared an explosive kiss with his childhood friend, Olympic snowboarder, Shaun. Will Christmas be the time for the two men to untangle lust from love, and find a future together that works?

Kyle is back in the minors to rehab his career but that’s not all he’s hoping to fix. He wants to get back the girl he left behind, but convincing Leah to take another chance on this former playboy will be harder than making it back to the NHL.