You know, I believe women deserve the right to vote and wear pants and all that good stuff, but there is an irrepressible part of me that loves the damsel in distress story. Like, way back in the 70s, when Star Wars came out, I could not get enough of that movie. She was a princess! She was in danger! She needed a hero and she got not one, but two. (Three if you count Chewy.) And that moment when Luke grabbed her and swung across the abyss like a pirate of old? Holy moly, talk about tropes.

Anyway, that’s all to prep you for a fantastic boxed set that is only available until January 31, 2015–8 Nights with a Hero. If you like suspenseful romance, this is the set for you.

In today’s spotlight, I have USA Today Bestselling Author Misty Evans. Ms. Evans has published over twenty novels and writes romantic suspense, urban fantasy, and paranormal romance. As a writing coach, she helps other authors bring their books – and their dreams of being published – to life. Misty likes her coffee black, her conspiracy stories juicy, and her wicked characters dressed in couture. When not reading or writing, she enjoys music, movies, and hanging out with her husband, twin sons, and two spoiled dogs.

To buy 8 Nights with a Hero:

The Royal Half and All the Kings Men are two powerhouses in the Los Angeles Kings community and I have long been a fan of their work. They are masters of GIFs and graphics and their wit is well-known to LA Kings fans like me.

In fact, if you heard the TV announcers talk about “That 70s Line”–Jeff Carter (#77), Tyler Toffoli (#73), and Tanner Pearson (#70)–that nickname was coined by The Royal Half on their blog. 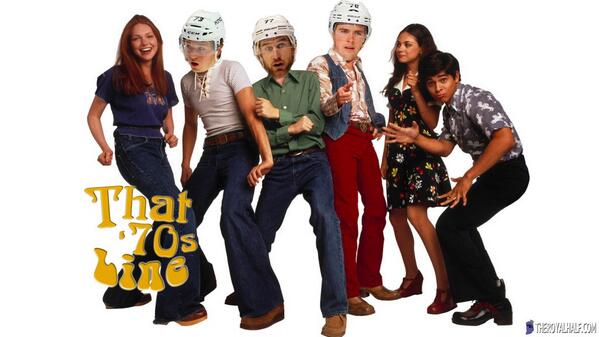 See what I mean about their graphics? Hilarious.

Anyway, recently they asked if I would agree to an interview on their podcast. I was terrified to do it. What if they made fun of me, my books and/or the romance genre? Hockey fans are hardcore. I envisioned myself being a babbling, incoherent mess and condemned to knowing that anyone could download my meltdown from iTunes and have themselves a laugh riot.

However, I knew that this was a fantastic opportunity for promotion. I hoped that any embarrassment I felt would be offset by a few sales. Surely there were some readers amongst those combined 17,000 Twitter followers who might enjoy reading an escapist hockey romance.

It turned out to be totally fun. I did stumble some and ramble a lot. At one point I forgot my point and had to admit I had no idea where I was going, but while I didn’t ace it by any long shot of the imagination, I didn’t crash and burn. The guys–there were three of them, so my first foursome!–were gentlemen and very respectful. I actually adored their nervous laughter when we started talking about the sex scenes. And my sales got a very respectable bump that week.

Thank you, The Royal Half and All the Kings Men. You guys rock.

Stop 2 on my mini blog hop is Fresh Fiction. I asked them if I could write about hockey pranks, since pranks are so prominent in my books and they were nice enough to host me again.

So, check it out. There is a short video of some Blackhawks playing a prank, which I found hilarious, and an excerpt from Across the Line in which Calder and Mac initiate certainly the most elaborate prank in the In the Zone series to date.

There’s also a giveaway in which you can choose which In the Zone book you would like to win!

My blog tour for ON THE SURFACE has officially started! The Give Me Books blog is helping us promote all six Sports Week romance releases from Carina Press. They created this very cool graphic for us.

I’ve been very lucky to be working with some terrific ladies, Kat Latham, Michele Mannon, Rebecca Crowley, Rhonda Shaw, and Allison Parr. They are the other authors whose books are part of Sports Week. We’re giving away a $20 gift card and a copy of all six e-books. The contest ends on Release Day, so enter at the Give Me Books blog or below! a Rafflecopter giveaway