Recently I found a real honest-to-goodness hockey wife who blogs regularly and shows no sign of stopping. I really love her blog. She has a great sense of style, is so full of life and enthusiasm and more than once she’s moved me to tears.

When she proposed a Secret Santa gift exchange, I decided to participate. It was fun shopping for my person, who happened to be an avid Sharks fan. I followed my Santa-ee on Twitter and Instagram and after trading tweets and pix, I feel like I’ve made a new friend, even though our teams are rivals duking it out for the 2013 Western Conference title. (Um, we beat them last night by the way, 4-1. I’m just saying… 😉 We are proof that a Sharks fan and a Kings fan can peacefully coexist.

Anyway, I received my gifts a couple of weeks ago. I figured it was from my Secret Santa, but I wasn’t completely sure until I opened it. I really couldn’t remember what I’d put down for my interests. But hello! I got Los Angeles Kings stuff to add to my (slightly embarrassing) collection.

First there is this can cooler. Awesome. Pay no attention to my horrid looking hair which sat under a Santa hat all day at work.

My other present was a reversible LA Kings hat, which I promptly wore to the game on December 7 against the New York Islanders. We won, so it must be a lucky hat! I made my hubby take a pic of me after the game with the Staples Center sign behind me, but being a man he didn’t pay any attention to the gigantic alien fat blob masquerading as a chin. Thanks, dude.

The hat kept me nice and toasty warm and I love it! I love both my gifts. Thanks, Santa! And thanks, Kym, for organizing it all.

At first, I was pissed disappointed at the players who had been assigned to the Valencia Ice Station–Kyle Clifford, Jordan Nolan, Jake Muzzin, and Dwight King. They aren’t the most popular players on the team. I went back and forth all morning about whether I wanted to go or not. I’ve never gone to a signing event and my jersey had no signatures.

My husband, who shall heretofore be known as Mr. Sir and younger son, Vibrato, convinced me to go. After work at around 11:30, Vibrato cruised by the ice rink to scope out the line. There were only about 20 people. Not bad! I could deal with that. If it had been a zoo, I wouldn’t have bothered. But 20 was manageable. After I put on a little makeup–damned if I’m going to meet some hockey players and not look halfway decent–Mr. Sir and I got into the car. On my lap I had three vital things: my laptop, so I could continue plugging away on IN THE ZONE Book #2, my Dustin Brown jersey, and my LA Kings advent calendar.

We got there and there were only about 30 people in line. It was fun. I wrote about 200 words, talked with other fans, watched some wannabe figure skaters and a couple of guys in Blackhawk jerseys. (Boooo!) We also heard that Clifford would not be coming because he’d been injured in the game the previous night.

The players were very nice and they looked so young and fresh and much smaller without all their gear on. We were only allowed one item per fan, so I carried the advent calendar and my husband took the Dustin Brown jersey. The staff member managing the line loved my calendar and offered to take our picture with the players in the background. Poor choice on her part, the photo was horribly backlit.

By the time we were done with posing, they were ready for us. I had planned to thank them for coming out to the Santa Clarita Valley when clearly everyone else didn’t want to. I had meant to congratulate King and Nolan on a fantastic game just the night before or even to ask how Nolan’s hand was, since he’d injured it in a fight.

I basically said, “Hi,” handed each player the calendar to sign, then muttered “Thanks” before moving to the next player.  Obviously, I’m a great conversationalist.

Muzzin who looked so so very young in person in just a T-shirt, jeans and a hat, paused thoughtfully and responded, “I don’t think they even make a Muzzin one.”

I thought that was hilarious. He wasn’t upset at all; he was just stating a fact. It just reinforced my impression that hockey players are incredibly humble. The nature of the game is so team oriented that they can’t take themselves too seriously. Every man does his part to the best of his ability, always thinking of the team and his teammates before himself.

Sniper (n.) – A player with a powerful, accurate shot skilled at finishing plays. Snipers frequently score more goals than assists. Snipers can be either forwards or defensemen. (Definition lifted from Wikipedia)

This is a photo of Tyler Toffoli, a young King who got some fantastic experience in the 2013 post season. He’s only 21, but has a reputation for finishing plays and scoring. A sniper is the guy you want to give the puck to because he’s the one who will put it in the net.

The other day I realized that Tim, the hero of my first hockey romance, could be considered a sniper. Now, sniper is a sexy word. I thought it might make a good word in a title. So, I emailed my editor something along the lines of, “It might be too late, but Tim is a sniper, which isn’t an official hockey position but maybe we could suggest a new title, if the team still wants a title with a hockey position in it.”

To my surprise, she said it wasn’t too late and the idea had merit. She encouraged me to think of some titles following these conventions:  Sniper’s ____ or ______ the Sniper.

Here’s what I came up with.

The bold ones are my favorites. Feel free to chime in on which one you like.

Bailey, the Los Angeles Kings mascot, is awesome. He’s such a cute, witty, positive “guy.” It’s difficult to describe what an awesome example of mascotness he embodies. He reminds me of Spongebob a little. He has that childlike innocence about him, and he often cracks me up with his Tweets about his life in the Staples Center. He’s also named after one of their scouts who died in the 9/11 terrorist attack. 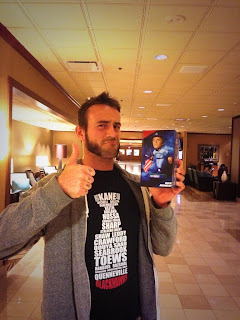 Anyway, recently he tweeted a picture of his buddy, CM Punk, a professional wrestler, wearing a Chicago Blackhawks t-shirt. (See photo left.) The shirt is actually a brilliantly designed graphic.

I tweeted Bailey, “Can I just say how much I hate his shirt? It’s a great design, but the names on it are wrong!!!” I didn’t expect a response because Bailey never tweets back to me. But that day, he did! I was so excited. It was a fan moment, for sure.